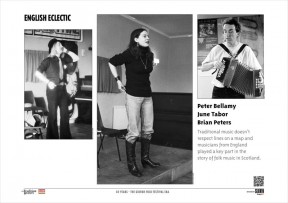 Brian Peters: Glossop-based Brian is one of the acknowledged English masters of the concertina and melodeon family, and is noted as a player, singer, researcher and composer. There are many regional styles within English traditional music, and Brian personifies those of the North-West, although he encompasses many more. As well as undertaking extensive research within his field, Brian composes tunes and songs in these traditional styles, casting a particularly quizzical eye at the iniquities of the Industrial Revolution and the effect that it had on both individuals and their communities.

Brian is also heavily committed to the educational uses of music and song, taking his work into local schools. His researches have unearthed several manuscripts of music which he now plays, breathing new life into old traditions.

Audio file: Bob Bray & Jon Scaiffe – at Girvan, I Wish I Was in London

Audio file: Jolly Jack – at Girvan, One of their concert sets