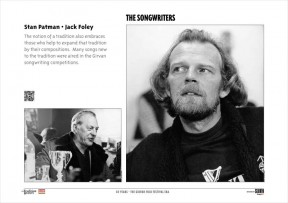 The notion of a tradition also embraces those who help to expand that tradition by their compositions, and the Festival seeks to encourage those people.
One way in which this encouragement was expressed was through the instituting of competitions. Although that concept sits uncomfortably with some, the Girvan songwriting competitions, which required composers to perform material which has not already passed in to common usage, are always scenes of friendly rivalry, where all are appreciative of each others’ efforts. From the very outset, when the likes of Stan Patman first made his mark, through superb crafters of words such as Jack Foley and John McCreadie, songwriters have had a special place in the Festival, with several of those entrants being later invited back as performers.