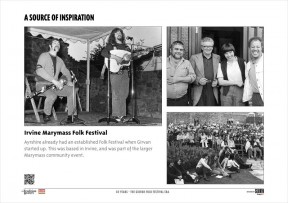 Ayrshire already had an established Folk Festival when Girvan started up. This was based in Irvine, and was part of the larger Marymass community event.
Ayrshire was a stronghold of the folk scene at that time, offering the opportunity to attend a different club every night of the week. Although audiences were largely local, many moved round the circuit, establishing friendships as they did so. This made the sharing of ideas and experiences easier, and meant that Girvan could look at what had been done elsewhere. The Marymass was differently structured from the way Girvan chose to develop, but Girvan organisers were able to assess the Marymass experiences and learn from their successes when fashioning their own. Irvine Marymass Folk Festival is still going strong!