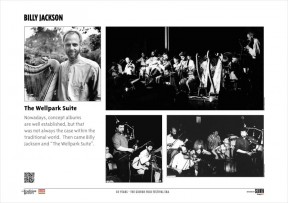 Nowadays, “concept albums” are well established, but that was not always the case within the traditional world. Then came Billy Jackson and “The Wellpark Suite”.
The work was commissioned by the brewing group Tennents to commemorate the 1985 centenary of Tennents lager, was named after the site of its Glasgow brewery, and first performed at the Burrell Collection. The work itself was composed by Billy Jackson as a six movement piece in traditional style. Largely featuring fiddles, clarsach, pipes, whistles and cello, the introduction of electric guitar and drums towards the end symbolised modernism and progression.

The Festival, with sponsorship by William Grant’s, distillers, saw its first performance outside Glasgow, and as such it was a notable coup for both the Festival and the town.