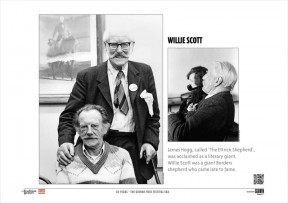 James Hogg, called ‘The Ettrick Shepherd’, was acclaimed as a literary giant. Willie Scott was a giant Borders shepherd who came late to fame.
Tall, if a bit stooped from years of exposure to the “cauld west winds” he “wished would never blaw”, Willie came to traditional singing fame later in his life than to his other exploits, and was an outstanding carrier and composer of songs which recounted his arduous way of making a living. An inveterate storyteller, he may have seemed to some a simple shepherd. But he was a much more complex character than that, having his encyclopaedic knowledge of Borders ballads enhanced by his lived experience of a way of life that hadn’t really changed all that much over decades.