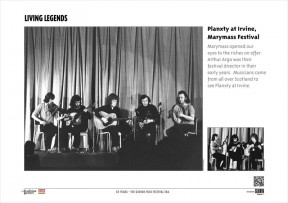 Although Girvan never played host to them as an entity, members did appear in several guises, and their approach to their music paralleled the organisers’. If a commitment to tradition, a joy in improvisation and a willingness to stretch boundaries were at the heart of what you were about, that is!

Planxty had appeared at the Marymass Festival, having a profound effect on the audience and organisers, in a similar way to the effect they were to have on Irish, and wider Celtic, music. Innovative rhythmic structures, played on instruments seldom, if ever, heard before were Planxty’s trademarks, as was the individual excellence of each member. The number of subsequent groups who based their sound on that of Planxty bore testament to their celebrated status.