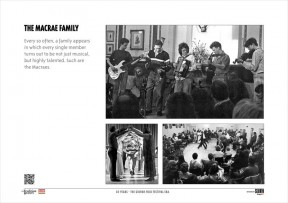 Every so often, a family appears in which every single member turns out to be not just musical, but highly talented. Such are the Macraes. They rose to prominence as frequent and popular entrants in the Folk Group competitions at Girvan (even appearing one year with paper bags over their heads so that the judges wouldn’t be unduly influenced – it didn’t work, the judges guessed correctly! Individually and collectively perennial members of the session scene.

A former organiser of Kilmarnock Folk Club, Maggie Macrae went on to found the Tattiehowkers Ceilidh Band, which went on to do substantial primary school traditional music development work in Ayrshire, and she regularly runs the children’s ceilidhs at Girvan.

Maggie is now the Artistic Director of Girvan Folk Festival.