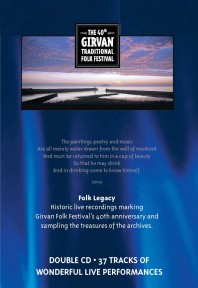 This website has links to photographs and sound recordings associated with The Girvan Folk Festival and also links to a developing archive of material of this era from various sources. Traditional Arts Development has released a double CD package, the first in an ongoing series of historic live recordings. The Girvan Folk Festival is supporting this release as part of their 40th anniversary celebrations.

‘… It was a time of creativity in all areas of music but was a particularly key period for folk music in Scotland.’

2014 marked the 40th Anniversary of the Girvan Folk Festival. The Festival started in 1974, a time when folk music in Scotland was increasingly exploring its own roots. The music of Ireland had a big influence in the early years of the folk revival in Scotland but by the mid seventies bands like the Boys of the Lough, Ossian and Battlefield Band were ready to take Scottish folk music to an international audience. Girvan’s geographic position helped it become a meeting point for musicians. Many artists from Ireland made their debut Scottish appearance at Girvan among them Mary Black, the early incarnations of Altan, Niamh Parsons, Arcady, Deanta and Dervish. Girvan had particularly strong links with folk musicians in Glasgow and the West of Scotland through groups like Kentigern, Setanta and the early line ups of The Battlefield Band. The World Premier of The Singing Kettle as a stage show was at Girvan.

To mark Girvan’s 40th anniversary we presented an exhibition at The Glasgow Royal Concert Hall during the Celtic Connections festival in January 2014. The core of the photographic exhibition catches many people at an interesting stage of their musical journeys. They had been around long enough to have established their identity but with long roads ahead of them. For many people this period is seen as a golden age. It was a time of creativity in all areas of music but was a particularly key period for folk music in Scotland. This exhibition is on ongoing project and is scheduled to be displayed at various festivals over the coming months.

The souvenir programme for the 40th Girvan Festival is available to download as a PDF using this link.  Girvan Folk Festival, 2014 Souvenir Programme