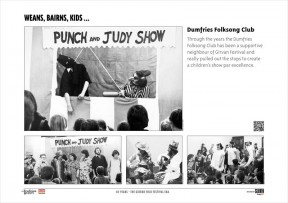 Dumfries, and the south-west in general, has always had a strong sense of tradition, and has through the years been a supportive neighbour of Girvan’s.
Many of the individual artists from Dumfries and environs have been connected with Girvan on both a solo and a band basis, with the singing group Stravaig being particularly well-remembered. In addition to their powerful harmonising, members of Stravaig were also noted for the work which they did within schools across their region, and so they became firm favourites with the younger generation.

Another noted contribution from the Doonhamers was the colourful and lively Punch and Judy show, which brought that internationally well-respected and loved act to the Festival, complete with their own subtly different takes on the classic turn.