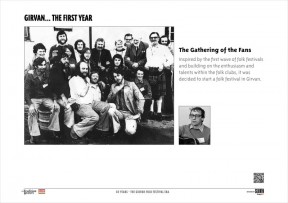 Inspired by contemporary developments of the concepts of folk clubs and festivals elsewhere within the traditional scene, it was decided to hold one in Girvan.
With the general feeling of “we can make this happen, so why shouldn’t we?”, the founding figures were Bobby and Nancy Robb; Ben and Marianne Robb; Joe and Iola Aitken; and Pete and Heather Heywood. Despite (or because of) their relative youth, they had collectively a vast experience of the developing traditional environment, and had a network of contacts of similarly-minded singers and musicians. Rightly judging the zeitgeist of the age, they started to plan a festival which could combine great music with a rural setting and a Public Holiday weekend to allow for recovery time. The first Festival was coming!