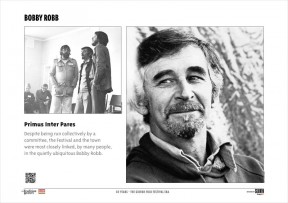 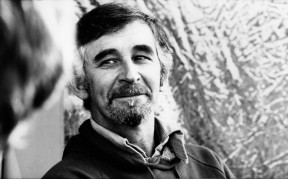 Despite being run collectively by a committee, the Festival and the town were most closely linked, by many people, in the quietly ubiquitous Bobby Robb.
Already known as an exceptional harmony singer from his performances with The Lave, and a solo singer of renown, Bobby’s ability to bring out the best in people allowed him to put his mark on the style of the Festival. This was to be an event where all were equal; where performers and audience could mix together to share their enjoyment of their traditions.

As others moved on, Bobby remained in Girvan and was not just a background organiser, but one who would be seen in sessions, generously sharing his knowledge of songs, and encouraging newcomers to have a go.

Audio file: Bobby Robb, One of his concert sets