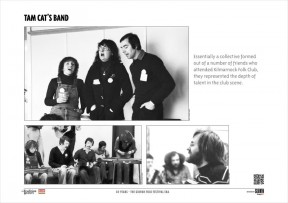 MARY STEWART AND TAM CAT’S BAND: Essentially a collective formed out of a number of friends who attended Kilmarnock Folk Club, they represented the depth of talent in the club scene. Able to turn their hands to solo and group singing as well as a variety of instruments, they were equally at home singing or playing for listening audiences or whooping up dance tunes to get people on their feet.

The Ayrshire and Dumfriesshire areas were, like many others in the country at the time, well-populated by folk clubs, such as those in Girvan, Dumfries, Irvine and Kilmarnock. These clubs, by encouraging floor spots from local audiences, helped burgeoning musicians and singers to boost their confidence in front of audiences, as well as allowing these audiences to hear a wider repertoire.