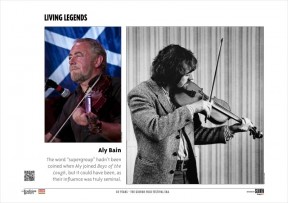 The word “supergroup” hadn’t been coined when Aly joined The Boys of the Lough, but it could have been, as their influence was truly seminal.
That Aly was a guest at any Festival would always be a source of pride to the organisers, as he has, over the years, become one of the front men of the traditional music scene, one of the few that most people outwith that scene would be able to name, thanks in no small part to his contributions to televised traditional music, such as The Transatlantic Sessions. A musician who sets the highest of standards for himself, Aly has the ability to personally engage with his audiences, drawing them in to his performance, which, everyone knows, will always be faultless.