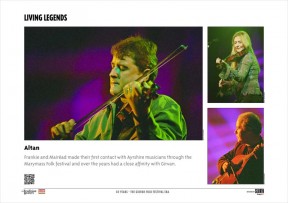 Many people have fond memories of Mairéad Ni Mhaonaigh and Frankie Kennedy sitting on a windowsill in the Queens Hotel playing session tunes all day.
We can’t say that it was purely their experiences of Girvan that made them go back home and establish Altan, who were destined to become one of Ireland’s greatest traditional phenomena. With their three-fiddle front line a first in its day, the drive they imparted was stunning, and when Mairéad started to sing, the purity of her tone took the collective breath out of any audience, no matter the venue.

Altan deservedly built their success on talent, innovation and a quality which was maintained any time band members changed, becoming recognised as one of the finest groups of all times.