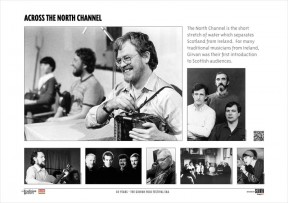 The North Channel is the short stretch of water which separates Scotland from Ireland. Being so close, it’s little wonder many Irish attend the Festival.
It’s not just a physical closeness, but a musical one which helps the interaction between the two sides of the water. Girvan has often acted as a springboard for individuals and groups who, having made a name for themselves on the Irish scene, were ready to take the risk of going overseas for the first time, to see if an international career was feasible.

And it was not just the professionals. In the days before the Ailsa Craig Hotel was redeveloped, it was known as the place in town where nothing but Irish music would be heard throughout the weekend.