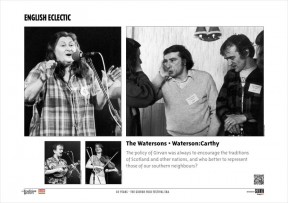 The policy of Girvan was always to encourage the traditions of Scotland and other nations, and who better to represent those of our Southern neighbours? One of the extended families with the largest contributions to make to the various English traditions, various members of the Waterson and Carthy dynasties found a welcoming and receptive fan base in Girvan. From the almost reverential acclaiming of Martin Carthy to the realisation that this young lass Eliza had a lot of potential, Girvan audiences had no narrow preconceptions regarding different traditions and were well aware of the reputation that the family had. Whether as solo performers or in their varying combinations, this was a family who influenced many in their singing and won over many in their hearts.

Audio file: Waterson:Carthy, When First I Came to Caledonia