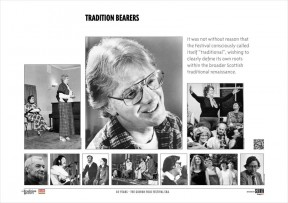 It was not without reason that the Festival consciously called itself “traditional”, wishing to clearly define its own roots within the broader Scottish traditional renaissance. Paradoxically, as a result, Girvan became known to many as a singers’ festival, despite the fact that the music sessions had a reputation that would hold their own with any others in the country. Sensitivity to the various strands of the tradition was reflected in booking policy. This led to increased audience expectations, which in turn boosted the quality of the event, and a great symbiotic relationship between event and audience developed.
The organisational ethos looked towards developing local and national content, but never parochially, as a commitment was made to promoting the music of Scotland and of other nations.

Audio file: The Gaugers, one of their Girvan concert sets PLEASE NOTE: In this file the Gaugers start about 50 seconds in.